GameOnStream Continues to Expand in City of Toronto

GameOnStream is excited to announce its latest GTA camera installation at Lambton Arena (York, ON). Since being awarded a long-term agreement with the City of Toronto in 2017, GameOnStream has installed automated broadcast systems to provide streaming in 10 of the GTA’s busiest arenas. 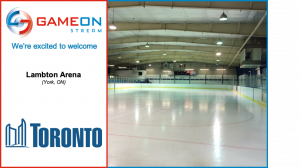 Two of the largest minor hockey leagues globally, the Greater Toronto Hockey League (GTHL) and the North York Hockey League (NYHL) play a number of Games at Lambton Arena, and subscribers to each league will benefit from the expanded streaming coverage.

We’re excited to continue our partnership with the City of Toronto and expand our streaming coverage in the GTA!